What does it mean when we say someone has a solid basic knowledge of astronomy? This is the question that inspired the project Big Ideas in Astronomy: A Proposed Definition of Astronomy Literacy, which resulted in a booklet of eleven “Big Ideas”, published in May 2019.

Now a new version of the resource is being launched, no longer just as a booklet, but also available on its own website. This version is available in a number of additional languages, and will also include two years’ worth of contributions from the worldwide community of scientists, educators and communicators.

The content is structured with each of the foundational Big Ideas, expanded into sub-ideas covering historical, philosophical, sociological, theoretical and observational aspects of astronomy. It is intended for use by the astronomy education and outreach community as a reference point for the essential things that an astronomically literate person anywhere in the world should know. It also aims to benefit society in general by setting guidelines for school curriculum development and assessment tools.

The booklet has already served as a valuable benchmark for numerous teachers, astronomy researchers and those who are active in astronomy outreach. But, just as importantly, it has also stimulated discussion within communities of astronomers and educators, which has helped it evolve into a version that reflects broad community consensus.

The new Big Ideas booklet is currently available in Arabic, Bengali, English, German, Haitian French, Italian, and Portuguese (PT). More languages are on the way, with the support of the IAU Astronomy Translation Network, the IAU National Outreach Coordinators of the Office of Astronomy Outreach and the National Astronomy Education Coordinators of the Office of Astronomy for Education. In addition, efforts are under way to conduct empirical studies on the Big Ideas, to foster curriculum development aligned with them, to promote the production of educational resources and materials for teacher training, and to prepare policy reports for curriculum development.

The Big Ideas in Astronomy project was led by the Leiden Observatory at Leiden University in the Netherlands and the Institute of Astrophysics and Space Sciences in Portugal. It was developed within the framework of the IAU Commission C1 for Astronomy Education and Development, in particular the Working Group on Literacy and Curriculum Development. In October 2020, the project found a permanent home under the recently-constituted IAU Office of Astronomy for Education, which supports professional astronomers and astronomy educators worldwide in bringing the wonder of this science into schools.

The IAU is the international astronomical organisation that brings together more than 12 000 active professional astronomers from more than 100 countries worldwide. Its mission is to promote and safeguard astronomy in all its aspects, including research, communication, education and development, through international cooperation. The IAU also serves as the internationally recognised authority for assigning designations to celestial bodies and the surface features on them. Founded in 1919, the IAU is the world's largest professional body for astronomers.

The IAU Office of Astronomy for Education is hosted at Haus der Astronomie (HdA), managed by the Max Planck Institute for Astronomy. The OAE’s mission is to support and coordinate astronomy education by astronomy researchers and educators, aimed at primary or secondary schools worldwide. HdA’s hosting the OAE was made possible through the support of the German foundations the Klaus Tschira Foundation and the Carl Zeiss Foundation. 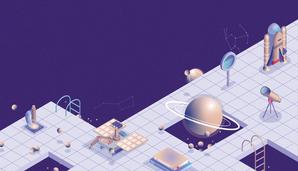