The IAU is pleased to announce two new institutions which will support the Office of Astronomy for Education (OAE) in attaining its goals. The OAE Center Cyprus and the OAE Node Nepal join the already founded OAE Center Italy in a growing network of larger OAE Centers and smaller OAE Nodes. This is a collaboration between the IAU, the OAE, and the Cyprus Space Exploration Organisation (CSEO, hosting the OAE Center Cyprus) and the Nepal Astronomical Society (NASO hosting the OAE Node Nepal).

IAU General Secretary, Teresa Lago said, “I am very pleased to see the rapid growth of the network of OAE Centers and Nodes. This is a confirmation, not only of the real need for the OAE as a fundamental pillar for the IAU to achieve its strategic goals, but also of the worldwide recognition of the relevance of the OAE’s activities and the willingness to be involved in them as a closer partner”.

Founded by the IAU in December 2019, the OAE is hosted by the Haus der Astronomie and the Max Planck Institute for Astronomy located in Heidelberg, Germany, with a mission to promote and support the development and improvement of astronomy education and related sciences all over the world. In pursuit of its mission, the OAE is building a network of collaborators and partners. In particular, this includes a network of National Astronomy Education Coordinators, who volunteer to act as liaison between the OAE and specific countries, and a network of OAE Centers and OAE Nodes: “branch offices” funded by suitable host organisations that have an interest in furthering astronomy education.

Markus Pössel, the OAE Director, says: “Supporting astronomy education world-wide is a massive endeavour, and requires a team of strong partners. We are happy to welcome our colleagues from Cyprus and from Nepal to that team — it is great that both the Cyprus Space Exploration Organisation and the Nepal Astronomical Society have taken the step to dedicate significant resources to our common goal!”

The OAE Center Cyprus is managed by Colm Larkin, from the Cyprus Space Exploration Organisation. The OAE Node Nepal is managed by Suresh Bhattarai, from the Nepal Astronomical Society, accounting for collaborations from science educators in the South Asian Association for Regional Cooperation (SAARC). The host organisations and IAU look forward to an exciting future of fruitful collaborations.

OAE Centers and Nodes will play an important role sharing the lead of global projects developed by the OAE, but also working on the national and regional scale by supporting initiatives in neighbouring countries or with a common language. In addition to participating in joint projects within the OAE, each Center or Node typically chooses certain areas of specialisation, corresponding to the host organisation’s experiences and strengths. The OAE Center Cyprus will focus on the modernisation of science centers and planetariums, education in space science, planetary science, climate change and the upper atmosphere, while helping to build the OAE’s network of collaborations in the Eastern Mediterranean, Middle East and North Africa (EMMEA Region). The OAE Node Nepal will focus on citizen-science projects in low-tech environments, teacher training programs and training for astronomy olympiads whilst working to build the OAE’s network of collaborations particularly in the SAARC region and, more generally, with countries facing similar challenges around the globe.

The President of the Cyprus Space Exploration Organisation, George A Danos, said “We are honoured that the IAU Office for Astronomy Education has recognised the experience of the Cyprus Space Exploration Organisation (CSEO) and has selected Cyprus to host an international astronomy education center, the OAE Center Cyprus. CSEO is committed to working with the IAU and OAE in spreading astronomy education, capacity building, seeding the next generation of scientists and engineers, who will make the next big discoveries in astronomy and cosmology. Cyprus’s location in the crossroads between three continents and CSEO’s friendly international relations, will allow this Center to act as a regional hub and education bridge, for peaceful cooperation and synergy, under one sky”.

Suresh Bhattarai said We are pleased to have the honour of hosting the first Node of the IAU Office of Astronomy for Education network. We expect to have the opportunity to offer and learn from our national, regional and international partners, playing a leading role in educational engagement.” 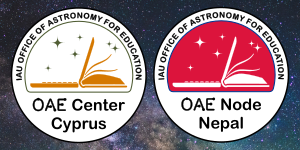