Light up the sky of the world, from the Expo in Dubai

On March 16, 2022, the "Let’s Light Up the Skies of the World" event took place in the Italian Pavillion of the 2020 EXPO in Dubai. Organized by OAE Center Italy and INAF, this consisted of two different moments: a hands-on laboratory for the pupils of local schools, and a roundtable discussion on the topic Astronomy for Teaching: from theory to practice, which took place both in person and in live streaming. The team organizing the event was composed by Caterina Boccato, Stefano Sandrelli, Alessandra Zanazzi and Livia Giacomini (all from the OAE Center Italy and INAF), with the support of the staff of the Italian Pavillion, led by Lorenzo Micheli. The team was also supported by Marcos Valdes, CEO of VIS (Virtual Immersions in Science), who, in the course of event, presented Moon Landing VR, a virtual-reality 360° video to live the Apollo 11 Moon landing.

In the teaching lab, called "Let’s Light Up the Skies of the World", about twenty girls from the GEMS Al Khaleej International School, an International school based in Dubai, lit up the stars with LEDs and paper circuits, inventing their own constellations and connecting them to the legends and myths of different cultures of the world. They were led, by the OAE Center Italy/INAF team and two teachers – Ruba Tarabay, STEAM Coordinator and Responsible for junior secondary classes, and Mohammed Kheder, astronomy teacher.

"In this laboratory, we reason on the fact that constellations do not exist, because they are formed by stars which are not connected to each other" said Alessandra Zanazzi, "However, constellations are important from the practical point of view, as a reference in order to measure both time and seasons. They also have an important cultural meaning, because all peoples of the world have always observed the sky and connected the dots of the stars to form drawings of what was important for their culture. In the laboratory, we started building a paper circuit, so as to light up a constellation made of LEDs, taking inspiration from a teaching proposal developed by the INAF Play Group. Then, based on the intercultural activities 'Cieli del mondo' [World Skies] who inspired several proposals of EduINAF, each participant was free to give vent to their own creativity, overlaying on 'official' constellations, the ones coming from different cultural traditions, or of their own design. Here in Dubai, we saw dromedaries, butterflies, and desert oasis being drawn…"

In the second part of the morning, a roundtable took place with Markus Poessel, Responsible for the IAU-OAE Office, Stefano Sandrelli and Sara Ricciardi of the OAE Center Italy, Hamid Al-Naimiy and Ilias Fernini of SAASST (Sharjah Academy for Astronomy, Space Sciences & Technology) and Pedro Russo of Leiden University/Ciência Viva.

Stefano Sandrelli, Director of the new OAE Center Italy added, "We are happy to be here today, because the theme of the Dubai EXPO is sustainability. The world can only be sustainable if it has at its heart a culture based on hospitality, on the mutual respect for differences and on true and profound dialogue. That is why the main issue of the roundtable is the codesign, which OAE Center Italy is carrying out with all the countries bordering the Mediterranean. In this project, each country proposes activities addressed to primary school pupils, which are later discussed and modified together. All this will result in a teacher training course which is going to be organized in the island of Lampedusa next summer."

The IAU is the international astronomical organisation that brings together more than 12 000 active professional astronomers from more than 100 countries worldwide. Its mission is to promote and safeguard astronomy in all its aspects, including research, communication, education and development, through international cooperation. The IAU also serves as the internationally recognised authority for assigning designations to celestial bodies and the surface features on them. Founded in 1919, the IAU is the world's largest professional body for astronomers.

The IAU Office of Astronomy for Education is hosted at Haus der Astronomie (HdA), managed by the Max Planck Institute for Astronomy. The OAE’s mission is to support and coordinate astronomy education by astronomy researchers and educators, aimed at primary or secondary schools worldwide. HdA’s hosting the OAE was made possible through the support of two German foundations: the Klaus Tschira Foundation and the Carl Zeiss Foundation. 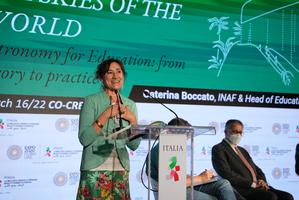 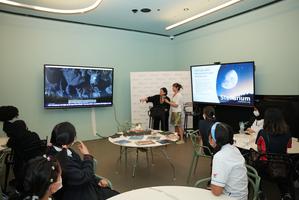 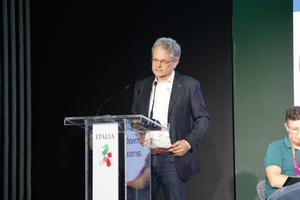 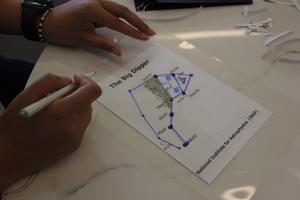