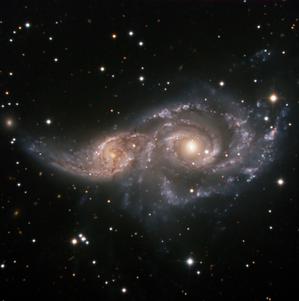 Caption: This image shows two interacting spiral galaxies located approximately 150 million light-years away. Two spiral galaxies are involved in this dance, creating visible distortions in their spiral arms due to the gravitational pull. What is starting as an embrace in this picture, will end in the merger of those two galaxies into one, most likely elliptical, galaxy.
Credit: ESO credit link
License: CC-BY-4.0 Creative Comments Attribution 4.0 International (CC BY 4.0) icons