Description: Pluto is one of the celestial bodies in our Solar System. It is located in the Kuiper Belt, beyond the orbit of Neptune. It used to be known as the ninth Solar System planet, but in 2006 it was reclassified as a dwarf planet. It was discovered in 1930 by Clyde Tombaugh. NASA's New Horizon mission was the first spacecraft to fly by Pluto, in 2015, and found that it has the following properties: Its average distance from the Sun is 6 billion kilometers (km), its radius is 1185 km (smaller than the Earth's moon), and hydrogen gas covers a large area of ​​its very cold surface. Its atmosphere extends to a distance of 1600 km. Its year is equivalent to 247.9 Earth years and its day is equivalent to 6.4 Earth days. Pluto is composed of rocks (70%) and ice (30%). It has five known moons: Charon, Styx, Nix, Kerberos, and Hydra. 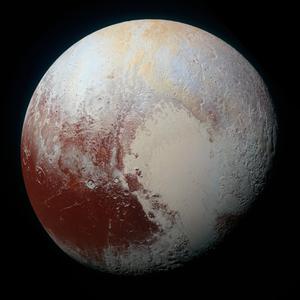